Why the RMB is depreciating?

China Tax & Investment Consultants Ltd expresses great gratitude to the author for his permission to reproduce the Chinese version of this article.

Only three trading days into the year of 2016, the dollar in the offshore market has already appreciated against the yuan by 2.35%, exceeding the interest earned from 2-year RMB time deposit. Since 10th August 2015, onshore US-yuan exchange rate has gone up by 5.6%, while the Shanghai Stock Exchange Composite Index has fallen by 10% during the same period. The trend for a sustained yuan weakness is obvious. What is the reason behind the yuan depreciation?

Before getting to know why the yuan has depreciated, it is imperative to know the continuous hike of the yuan against the dollar over the last decade-plus. During that period of time, huge amount of foreign capital poured into China as the Chinese economy grew at a very fast rate and investment opportunity was abundant, which pushed up the yuan exchange rate. On the other hand, China became the world factory with rapid increase in exports and surplus in the trade balance, thus pushing up the yuan exchange rate. Beginning from 2009, however, an important factor unknown to the market bolstered the hike in the yuan exchange rate, and it is also this factor that makes the depreciation of the yuan a certainty. 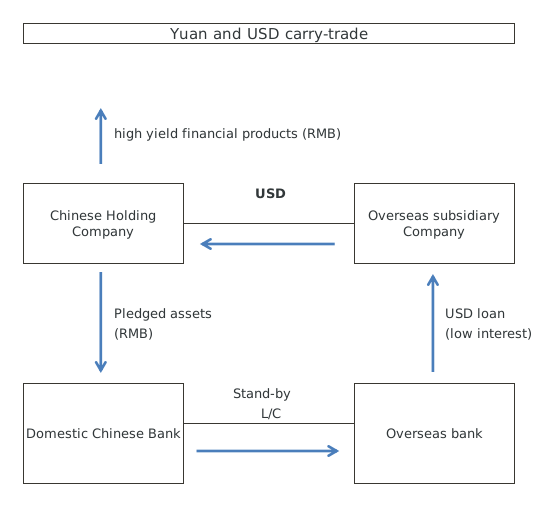 A few years ago, the author found an anomaly in the annual report of a ship-building company. The income earned from the investment in financial products accounted for over 60% of the total profit, exceeding the income derived from the principal ship-building business. As shown in the balance sheet, the USD loan arranged from outside China became the major source of funds for the investment in various trust-type financial products amounting to 10 billion yuan. This company obtained USD L/C facilities from the bank and the resulting financial leverage, by pledging the yuan assets it owned in China. The foreign subsidiary of the parent company obtained short-term USD loans from the bank, on the strength of the stand-by letters of credit issued by the banker of the parent company in China. And then, the foreign subsidiary channeled the USD back to the parent company through various means of inward remittance, so that the parent could profit from the investment in the higher yield financial products.

During that period the interest rate for trade financing of 6-month duration was about 3% while the return on investment in the trust-type financial products gave 10%. Coupled with the Yuan-USD appreciation and the built-in leverage in those financial products, the yield for the enterprises would amount to the following sum: (7% + yuan appreciation + leverage). Given the least conservative leverage of 200%, the return to the enterprise will be no less than 20% per year, due to the 1.4% to 5% appreciation of the yuan from 2010 to 2013. The 20% return on investment was pretty much attractive at a time when running the core ship-building business faced with escalating difficulty. It is no wonder that the CEO of the enterprise would consider the currency carry-trade is low-risk, high-yield business, and made great effort on the carry-trade. The entrepreneur who possessed the skills to do manufacturing business but no knowledge of the financial products and the operations in the financial market, started to profit from the carry-trade in the currency market for the first time. Once they had a taste for it, they would place a low priority on the small profits that they worked hard to earn from the manufacturing business. 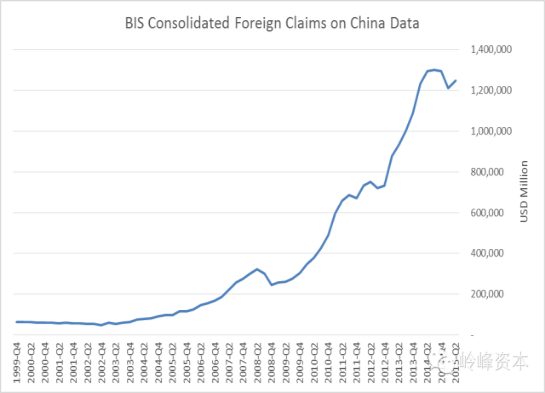 That is only a drop in the ocean. The author found from the statistics compiled by the Bank of International Settlements that this type of carry-trade amounted to as much as one trillion US dollar. The more risky things are that 70% of these one trillion US carry-trade funds are financed by short-term loans, which must be redeemed on a rollover basis continuously. 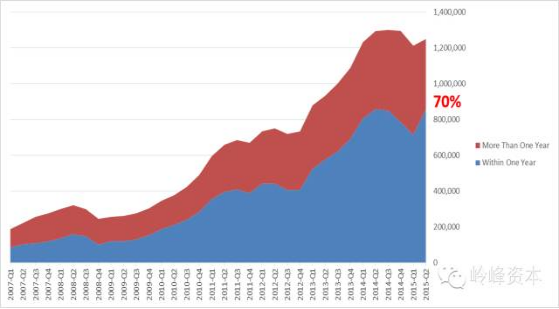 One trillion US dollar is no small amount. That accounts for about 1/3 of China’s foreign exchange reserves. In other words, one third of the reserves are hot money for the carry-trade. They will leave China when the situation does not look good. At the moment, the return from real economy is getting lower and lower. Without large amounts of inflow foreign capital, it is difficult for China to offset the amount of capital outflow by the inflow arising from the surplus in the trade balances, and thus the yuan will start to depreciate against the dollar. This one trillion US engaged in the carry-trade is heading for disasters. First, the interest rate for offshore USD financing will rise in the wake of the rate hike announced by the Federal Reserves. Second, the rate of return from the financial products in the domestic market is getting lower and lower. The crux of the issue here is that yuan depreciation has reversed the yuan-USD carry-trade, turning profits into huge losses due to the accelerating effect in the leverage. The table for the carry-trade has turned, the carry traders must flee. The same has happened in the A-share stock market. The speculators trading on high margin financing pushed up the stock market index, and earned high returns of several times. But they were all caught in the stampede during the stock market crash.

Should the currency carry-trade reverse in an orderly manner and the arbitrage capital flow out of China gradually, the pressure for yuan depreciation will be less. However, the order of the financial market is like a swarm of bees. In his book “the Alchemy of finance”, George Soros writes: “more important is when a trend of change is recognized, the volume of speculative transactions is likely to undergo a drastic, not to say catastrophic, increase. When a trend persists, the speculative flows are incremental; but a reversal not only involves the current flows but also the accumulated stock of the capital. The longer the trend has persisted, the larger the accumulation. Of course, there are mitigating circumstances. One is that the participants of the market are likely to recognize a change in trend only gradually. The other is the authorities are bound to be aware of the danger and do something to prevent a crash.” For now, the carry traders already spot the change in trend, while the central bank, after trying to turn things around on various occasions, has lost the willingness and the ability to keep the exchange rate of the yuan to stabilize at the current level.

What is the real and certain opportunity? It is when the market participants find that they must do it. That is the real and certain opportunity. Soros said reflexivity is such a situation. In the bubbles, the participants cannot help do it. They will lose if they do not participate in it as others will participate. When the bubble bursts, others will run if you do not run. If you don’t, you will be dead in the stampede. At this level of the US-yuan exchange rate, other will do the conversion if you do not do. Thinking about the one trillion US carry-trade money, the yuan price for now is very attractive. These amounts of carry-trade money are in for disasters. It is a life or death situation and the money must be converted into the dollar. Bankers outside China are no philanthropists. They will always call back the USD loans when credit conditions are tightened. It goes without saying that the trend for a weakening yuan in the next few years is too obvious.

Why the yuan is depreciating? In addition to the economic factors, the most important thing is the unwinding of the USD carry-trade that amounts to as much as one trillion US plus. The speculators have enjoyed the feasts during the past years, and got high returns using the financial leverage, pushing up the exchange rate of the yuan. For now, they are fleeing China, leaving those who hold yuan assets to foot the bill for the depreciated yuan.